I like idea a vertical turf scrubber, it seems like a better solution than the old surge type boxes.
But I think you are getting a little carried away with the bold claims you're making, its not as if turf scrubbers are something new..
From what I understand about algae used for filtering waste water, the type of algae is very important as certain algae are far better at removing nutrients than others. Maintaining the desired algae type on the scrubber could end up being a lot of work.
Also 4 months without a waterchange in that nano is pretty shocking. I think it would look better and be easier to leave the old hood and light on and just do a water change once a week.
Negatives aside, I think that the vertical one you made is really innovative and you should develop that idea.

Glad you like the idea. And as I mentioned in my post, a lot of the mechanisms of turf have been on the forums for a while. I read most of them going back to 2000, and a few alt.rec.aquaria ones back to '93. And I also gathered info from those who used turf in the past, or read Dynamic Aquaria, which thereby brings us back to the '70s for using turf in aquariums. The "new" part, however, is just putting the turf into a bucket, and doing it for (basically) free. The only commercial turf unit you can buy today cost $3,000 USD, and is bigger than most tanks itself. Since basically nobody is going to spend that, and because it's so big, there has been no talk of turf in the last few years, and therefore folks new to reefs don't know about turf at all. Kinda like if there were a new type of skimmer that only cost $30 but outperformed every other type including becketts, but nobody was talking about it. The purpose of me posting is to get new folks involved, without making it too technical, so that we can all benefit from what can be learned about the turf. I left the technical stuff on the original RC post.

You are correct about there being different types; fortunatly however, it requires no effort to get the right types. The current understanding of turf filtering is that the key is to grow real turf, which is reddish/brown in color, and stiff like astro turf in texture, and to remove the green hair/slime algae that grows first and/or on top of the turf. In otherwords, green hair/slime is not turf; it's a nuisance algae in this application, and it prevents the real turf from getting light and flow.

What happens sometimes (or what happened to folks who tried turf in the past), is that they thought that the green algae was just a different type of "turf". So they left it. But it's not turf. It's a nuisance algae covering the real turf. However it grows much faster and longer than the turf ("fast growing" does not mean high nutrient extraction, however, because most of content of green algae is water). This explains why it's the first algae to grow on a new un-seeded screen, and why even if you buy a pre-grown screen, the screen seems to morph from brownish/red into green.

But it's not morphing; it being smothered by the green. So for a screen that is less than a few months old, instead of scraping weekly all the algae off the screen, instead you should be "scrubbing" the green algae off of the turf algae (thereby leaving the turf). While the green is good in and of itself (it does do some filtering, and it will be the first to grow on a new screen), it does not compare to real red/green turf.

The trick is to keep the green hair/slime off of the turf so the turf does not get shaded. It's really easy to scrub the green off, like washing your hair. Just run tap water over it, and scrub with your fingernail. The green comes right off, and turf stays on (you'll need more than your fingernails to remove real turf.) You should hold off doing an actual scraping of the turf until the screen is completely full of it, and even then consider just scraping part of the turf at a time.

As for the nano, it was a test tank, because it's owner hated water changes. Even when he did them, N never got less that 20. Now N is zero, and P just hit zero yesterday.
Expand signature
888-CORAL-REEF
Research Studies
Nutrient Removal Discussion

I must say; I'm intrigued..
I'd like to give this a try, but I have a few questions:

I have a DIY sump made from a 10 gal. tank with a few baffles in it, and my flow rate is pretty high..

1. Does the screen need to be in the first chamber?

2. Must the screen be above the water line, or can water flow through it? I ask this, because I would think of putting it in between the baffles; maybe even running two screens..

I've seen the hair algae grow on my skimmer's "water break" (I constructed a second chamber to reroute the output down the tank wall, decreasing the disruption of the sand bed.). It can be pretty persistant.

I fight the nitrate battle quite a bit, and a skimmer is all I run for filtration. I like the appeal of an alternative!
Expand signature
90 gallon tank stocked with 1 Yellow tang, several damsels, porcupine puffer, 1 clownfish, baby moray (for the DAMSELS), carpet anemone, 2 mated coral banded shrimp, 1 cleaner shrimp, 1 serpent starfish, 1 Hawaiian featherduster, 1 lazy cucumber and now, 1 curlycue anemone..

The screen is not submerged; it needs water flowing down over it. It would need to go (probably) in the bio ball section which usually is not submerged. I guess that would be your first chamber. Or, you could actually put it above the sump and have it drain down.

If you size the screen right, and have good flow, and strong lighting, your nitrates will probably be zero in three weeks.
Expand signature
888-CORAL-REEF
Research Studies
Nutrient Removal Discussion

Well, that leaves me a few options:

1. My first chamber is not very big, and has the full flow of my overflow running through it. I'm assuming it's too fast. I would have to restrict the in flow, and that would mean I'd have to restrict my return pump as well.. I don't wanna do that.

2. I suppose I could construct a screen under my skimmer's output.. I dunno if this would be counter productive, but if I shut off the air supply to the skimmer, it would become nothing more than another pump. This is the only way I can see adapting the sump without restricting water flow or ripping out and redoing the bafle setup.

I was thinking about laying a screen at the water level of the last baffle. The screen would sit at the surfface of the water, and water would flow up through the bottom slightly as it passed over the last baffle.. Sound feasable?
Expand signature
90 gallon tank stocked with 1 Yellow tang, several damsels, porcupine puffer, 1 clownfish, baby moray (for the DAMSELS), carpet anemone, 2 mated coral banded shrimp, 1 cleaner shrimp, 1 serpent starfish, 1 Hawaiian featherduster, 1 lazy cucumber and now, 1 curlycue anemone..

Sump Version 3 is pretty much a bucket, without the bucket.

How big is your first chamber? Your tank is the same as mine; you only need about 10 X 10 inches. You can run all your overflow over it; won't hurt, and actually helps.

The "laying the screen at the water level" would work if you mean horizontally, and if the flow and light is strong. Look at this: 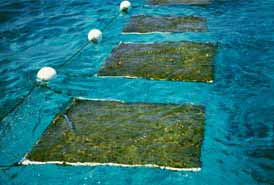 That's exactly what I mean..

Just keep it closest to the most turbulence and bubbles, and shine as much light on it as possible.
Expand signature
888-CORAL-REEF
Research Studies
Nutrient Removal Discussion

Easy enough.. I think I'll anchor the end nearest the return pump, and rig some "floatys" for the far side.. That way, it will always remain near the surface, and all the water will flow through it at some point along the screen. I have some plastic canvas (needlepoint stuff) that I can use.. I'll get right on it!
Expand signature
90 gallon tank stocked with 1 Yellow tang, several damsels, porcupine puffer, 1 clownfish, baby moray (for the DAMSELS), carpet anemone, 2 mated coral banded shrimp, 1 cleaner shrimp, 1 serpent starfish, 1 Hawaiian featherduster, 1 lazy cucumber and now, 1 curlycue anemone..
You must log in or register to reply here.
Share:
Facebook Twitter Reddit Pinterest Tumblr WhatsApp Email Link
Top Bottom