what would be good is if someone could find a way to alternate the flow down the screen- so that one side gets all the flow then it switches to the other side and so forth, so that each side gets equal air and flow.
This would save having to turn the pump on and off, and it would be more efficient having the pump running constantly.
I hope that makes sense...

kcress: Yes I thought there was too much good to come from turf to not try it. Correct, the screen needs to be out of the water to: Maximize turbulent flow across it; allow it to get bright light; allow it to dry for a few seconds between waves (if you use a wavetimer on the pump.) The wavetimer is the poor man's surge device, and works great for me. And correct about the hair algae: With real waves in the ocean, and with Aday's powerful dumping device, the green hair was washed away which left the strong stiff red/brown algae. Fortunately, and this is a new discovery, by just cleaning the green off manually (at least weekly) you will allow the red/brown to grow.

deth: It does not have to come out of the water, just stir up the top.
Expand signature
888-CORAL-REEF
Research Studies
Nutrient Removal Discussion

Here's some results for the turf bucket that was built for the main (not nano) build thread. Below are the pics of the screen, day by day, for the first seven days. I had sanded both sides of the screen, and then "seeded" the screen by rubbing green algae HARD into it. After water flowed over it, only a couple visible specs remained (the rest are invisible spores) that grew a little by the Day 2 pic. It should be noted that this new bucket is working side-by-side on the same tank that my original test bucket is on: 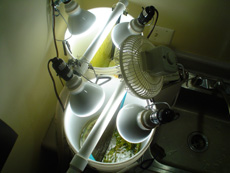 This means that the new screen is sharing nutrients and competing directly against my established screen that I got pre-grown from IA over a month ago. Also, N and P were already zero, so nutrients were hard to come by. So this new screen had little to grow on, unlike the nano. Nevertheless, these pics show the growth progress you MIGHT expect if you decide to grow your own screen from scratch:


Day 2; the specs from seeding are visible: 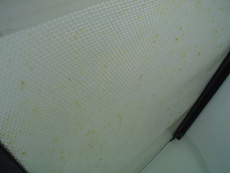 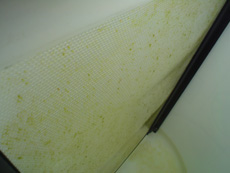 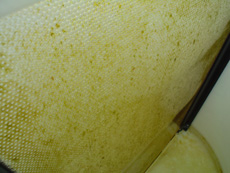 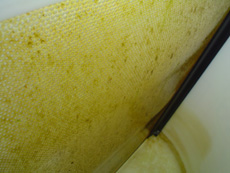 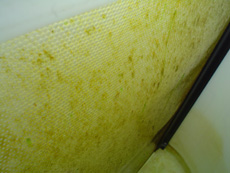 Day 7: Some green hair is over two inches long: 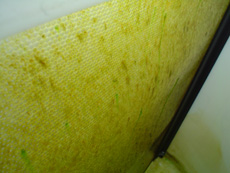 Day 7 Closeup; Some brown spots are lengthening, and some green hair is flowing past the bottom; And although it's hard to see, most of the holes are still open: 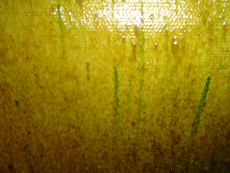 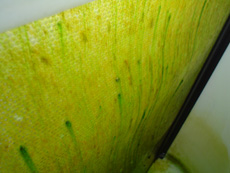 Day 9; Some brown spots are getting thick, and some green areas are starting to cover up other areas. Almost all holes are grown over; time to clean! 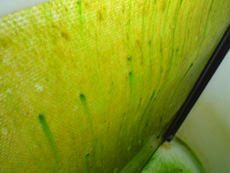 Day 9 Screen Removed; Note the light colored spots on the bottom half. These are probably copepods eating the algae, since I did not clean and freshwater-rinse in over a week: 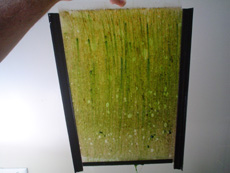 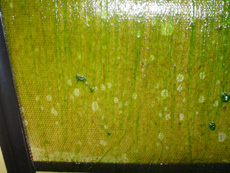 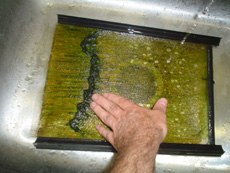 Day 9 Harvest of first week; Remember that this screen is getting what nutrients are leftover from my other screen: 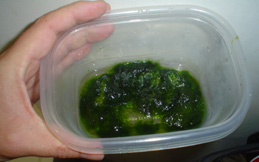 Day 9 After Cleaning; Note I cleaned both sides, which you only do the first cleaning (thereafter you only clean one side at a time): 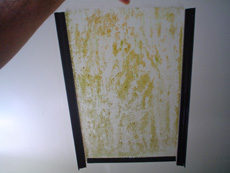 
So that takes us through the first cleaning cycle of a new screen. Was surprised to see the light spots on the screen since I never saw any on my established screen, but then this new screen is so thin right now that any spots become easily visible. You should not go more than a week between cleaning and a freshwater rinse (freshwater will kill the pods) like I just did; I just wanted to get a decent amount of algae to harvest so you would be able to see it.

Interesting that all the spots are on the lower half of the screen, which in my bucket is the part that stays underwater more often, since the bucket fills partially as the pump runs. (It shouldn't do this, but I have not connected a ball valve to the pump yet, so I can't slow it down). So apparently, the copepods can't survive well when the water flows away, leaving just air. This is a good reason to not submerge your screen, and also to consider having a timer on the pump to let the screen dry out for 30 or 60 seconds between "waves".

On the cleaning, note that I took off all the green, but left the brown. You always want to do this, in order to prepare the screen for developing real red/brown turf later.

Note on "Day 9 Screen Removed", that there is a bit more coverage on the right than on the left. That's because most of the flow has been going on the right side. But as you can see it does not change the coverage that much.
Expand signature
888-CORAL-REEF
Research Studies
Nutrient Removal Discussion

Here's a neat screen that someone just built. Since there was no vertical room in his sump area, he asked about horizontal options and I showed him the commercial floating turf screens. He made one out of floating material: 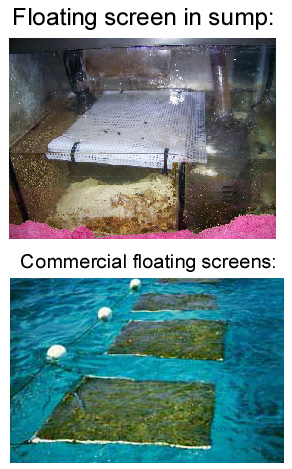 so i want to know the result of this floating screen.....

so i want to know the result of this floating screen.....

So far, it's working pretty good..
I don't have as heavy of a growth yet, compared to his "day 5" picture, but I do have some growth. I think he seeded it far better than I; I didn't have a lot to use for seeding.

I'm debating the idea of hanging the screen under the skimmer to get a slight slope. If the growth seems to be suffering, I may do just that.
Expand signature
90 gallon tank stocked with 1 Yellow tang, several damsels, porcupine puffer, 1 clownfish, baby moray (for the DAMSELS), carpet anemone, 2 mated coral banded shrimp, 1 cleaner shrimp, 1 serpent starfish, 1 Hawaiian featherduster, 1 lazy cucumber and now, 1 curlycue anemone..

Morgadeth said:
So far, it's working pretty good..
I don't have as heavy of a growth yet, compared to his "day 5" picture, but I do have some growth. I think he seeded it far better than I; I didn't have a lot to use for seeding.

I'm debating the idea of hanging the screen under the skimmer to get a slight slope. If the growth seems to be suffering, I may do just that.
Click to expand...

thanks... for the information... so it's work... i already stop my skimmer... and apply this to my aqua... we will see in a week
Expand signature
45 gal salt water
bi-color angel, blue hippo tank, tomato clown, clown fish (RIP, jump from tank), black domino damselfish, yellow tail dalmfish, and blue streak cleaner wrasse(RIP jump from tank)

The floating version is just a screen floating on the surface. I have not built this version, but I could see it being done with a stiff screen that has small pieces of styrofoam on each corner, so that the screen just barely floats. You want it to dip down occaisionally, so as to get little waves across the top. And the water needs to be turbulent, like with the overflow pouring nearby (or even onto the screen), or with a powerhead pointed up from the bottom.

The floating version's biggest advantage, of course, is simplicity. It really requires nothing. Also, there's no way for the screen to accidentally dry out, whether it be power outage, pump failure, etc. Disadvantages: It can only be one sided; you'll be growing algae on the walls of your sump; the width of your sump may not give you enough available screen size (especially considering you need twice the area for single-sided); it can be difficult getting enough turbulence across the screen; you cannot "pulse" the water with a wavemaker timer (pulse makes it more favorable to red/brown turf); and the light would be dangerously close the the waterlevel.
Expand signature
888-CORAL-REEF
Research Studies
Nutrient Removal Discussion

Here the first pre-grown installation I've seen (except for mine)... jski711 on another board said: "I can't believe how well this DIY thing worked. It literally took all of 45 minutes once I had the materials. And I have noticed my pH raise up about .15 in a few hours since installing it."

I made a slight nodification:

Using fishing line, I suspended the screen from the underside of the skimmer output. Now, is sits at an angle like a slide, and the water spills down and through it. I figure as the growth starts to take effect, the water will get better dispersion over the screen..

You can see where my growth has started from just letting it float. I'm sure it will work that way as well, but I'd like to see a bit more.. 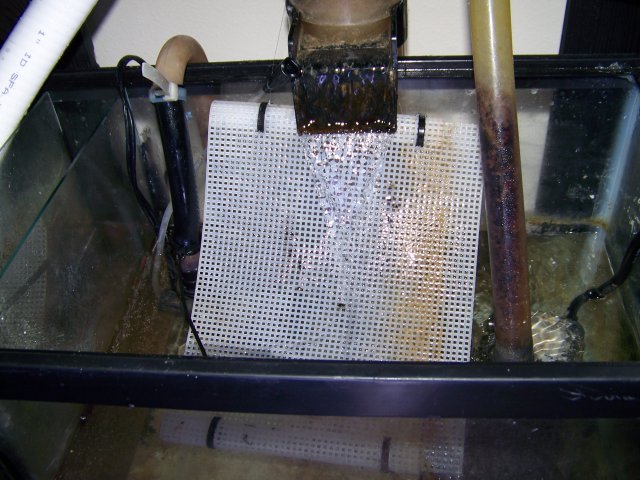 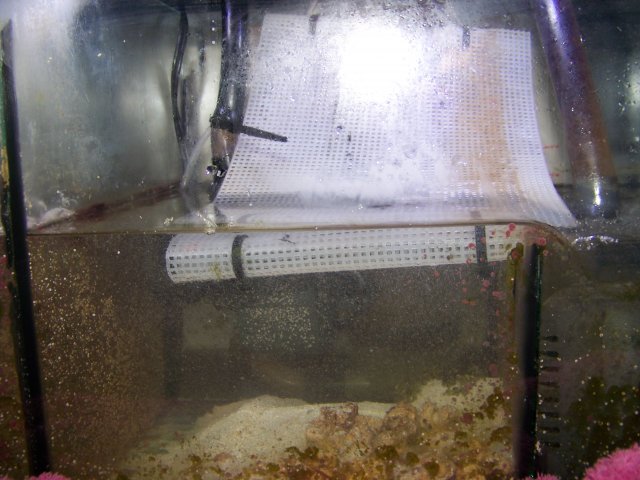