Here we go again. The vallis on the left is almost at the surface and the right's baby is already half the height of the parent, so they're doing great. The Java ferns are also making a bunch of babies but I need to get more rubber bands to attach them. Thinking of moving them to the spider wood branches. 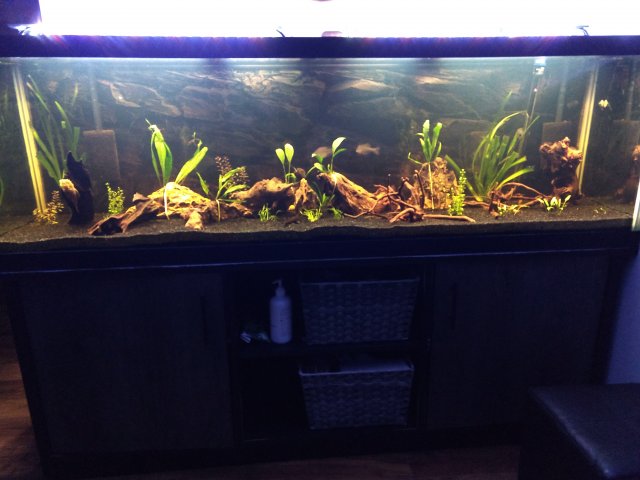 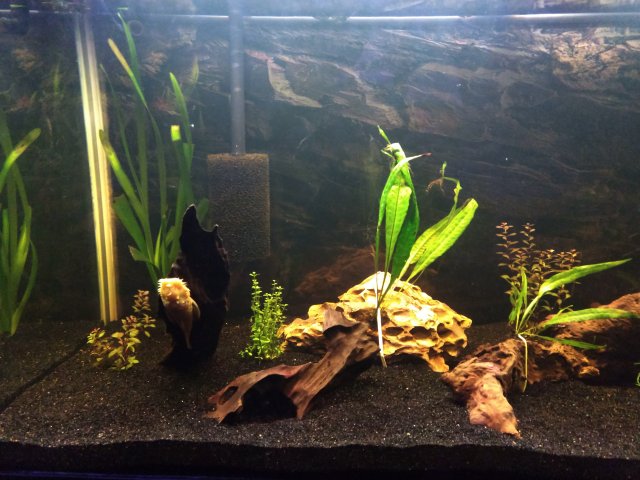 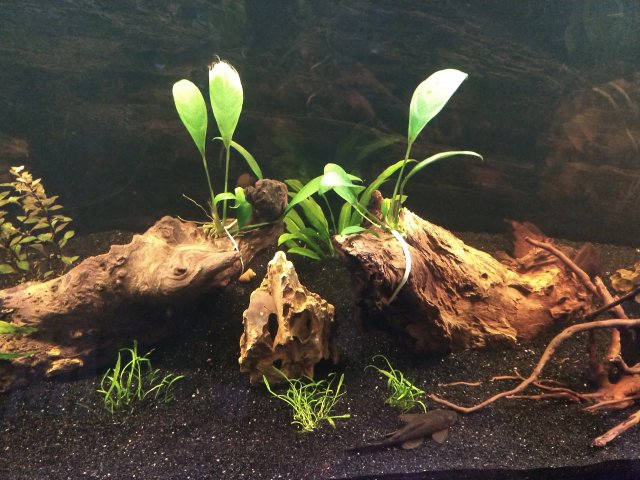 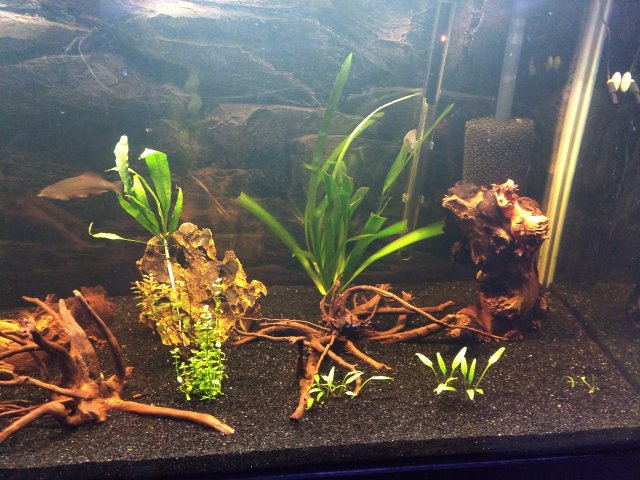 The micro swords however look terrible. I've had to shove their foliage back into the sand so many times that they just look like random little weeds at this point. 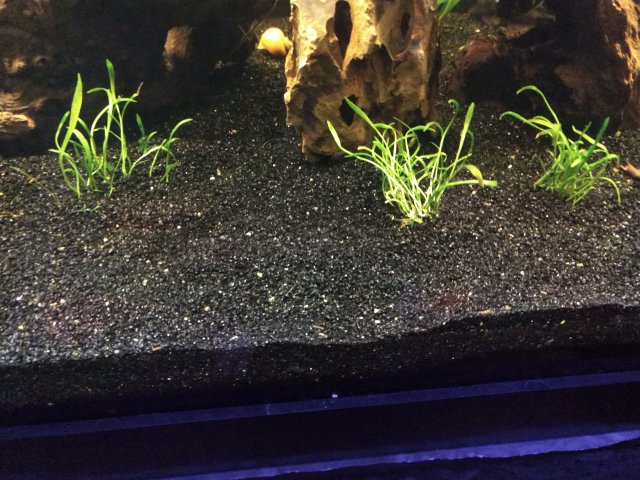 The bacopas don't look much better. Not much fresh growth and seem to be stuck in a perpetual melting phase along with being uprooted at times (not as bad as the micro swords but still). 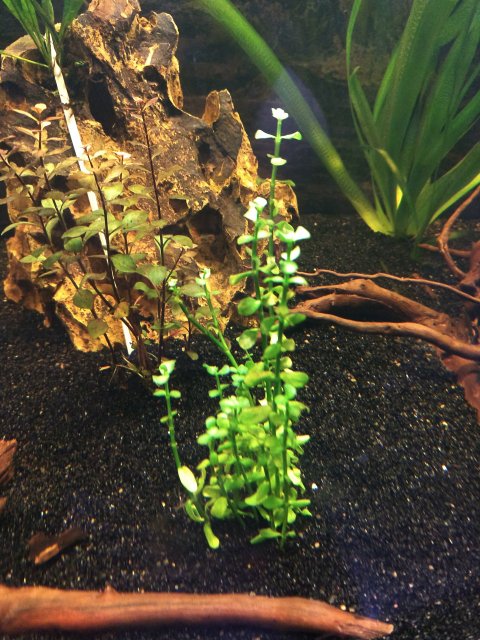 The ludwigias are middle of the road. Constantly shedding leaves (there's always some floating around the tank) and uproots, but they're putting more effort towards new growth compared to the others. 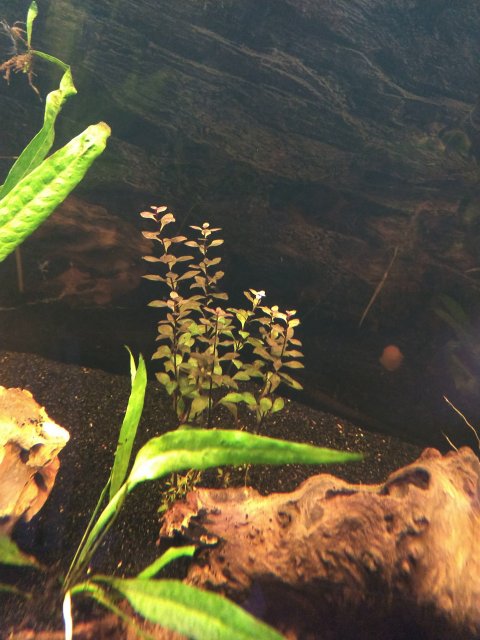 Amazon sword hasn't really put any work into vertical growth yet so it's rather hidden in the background. The anubias are more or less the same, just taking their time with each leaf. 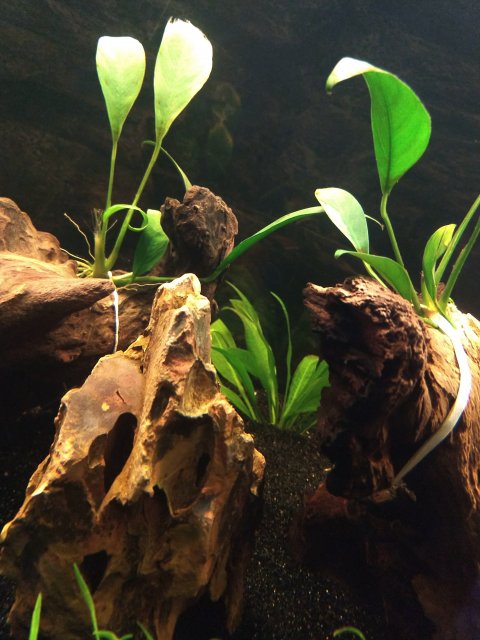 Now on to the fish, starting with the albino bristlenose.

This guy. THIS GUY. Constantly digs holes in the sand everywhere (most of the foliage I find free floating is his "handiwork"), threatens to get himself crushed by burrowing under the large dragon stone on the left side of the tank, and yet most of the day he just sits under this driftwood like he didn't no anything earlier. Quite annoying. 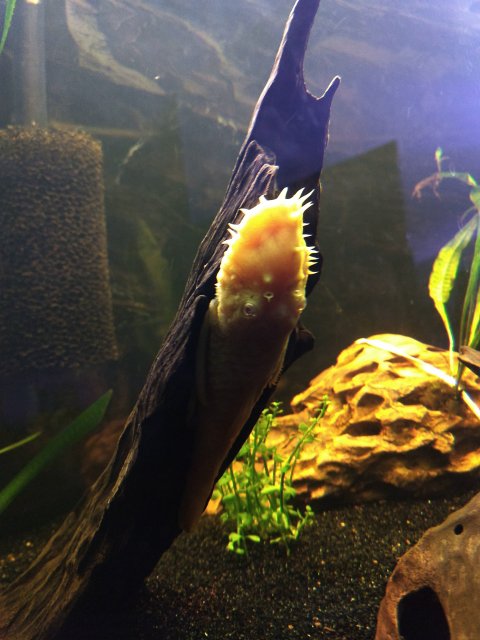 The more "well behaved" female. Except towards the mystery snails, she seems to make it her personal mission to bowl them over whenever it's feeding time. 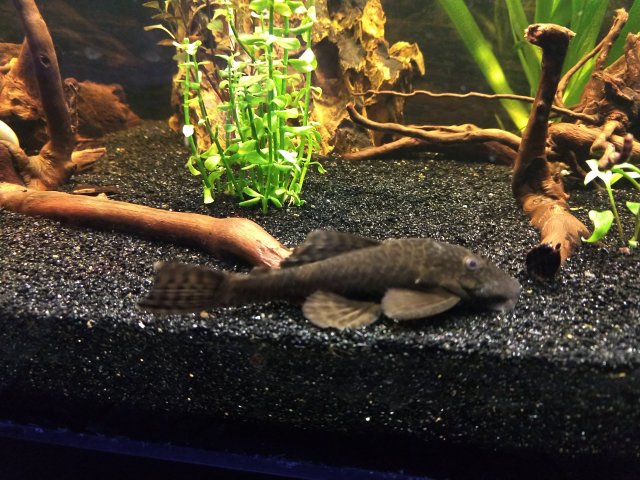 Vagrant, the wayward female guppy that found her way in the tank with a couple of the mystery snails and the only fish I have blessed with a name. She's not only been thriving but she's putting on more color with the black around her tail and top fin. Almost looks like a tuxedo strain, but I know very little about guppy genetics so if someone more experienced knows I'd appreciate it.

Can also see some of the Salvinia here. They're growing new leaves but I swear the snails have been sneaking some nibbles as I've been finding some chewed-like chunks missing, and it's not like the snails aren't fed otherwise (if anything they're pampered). 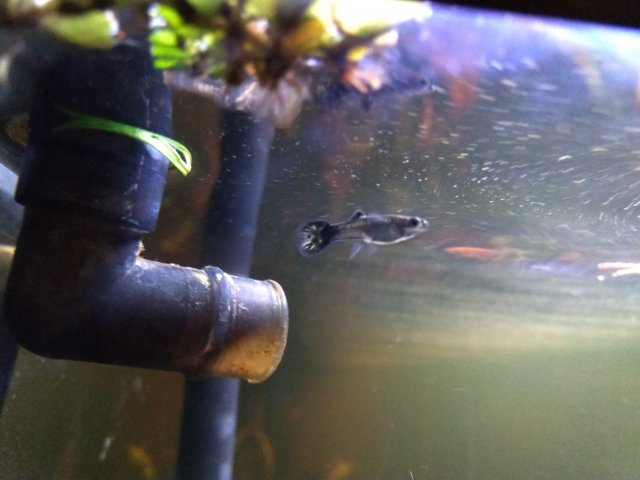 The best pic I could get of the giant danio and Australian rainbowfish. I've noticed that ever since the move they've grown a lot more shy due to more open water and lack of other dither fish (Vagrant is similar, she rarely leaves the top left of the tank). Considering adding the neon tetras and cories I have in quarantine a bit early so there's more movement to make everyone more comfortable, possibly next week if they stay healthy. 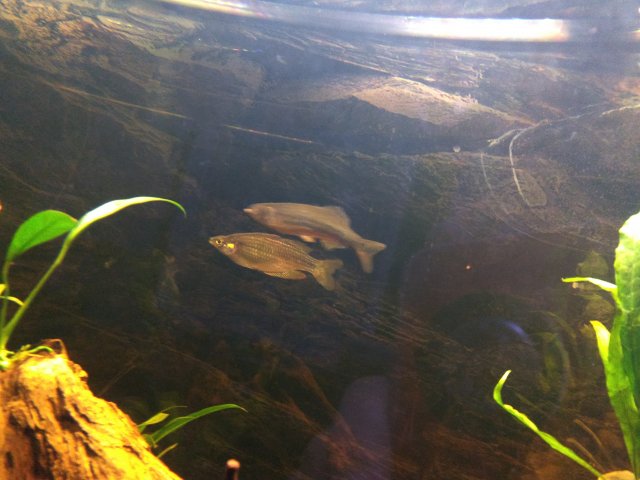 Snagrio said:
The more "well behaved" female. Except towards the mystery snails, she seems to make it her personal mission to bowl them over whenever it's feeding time.
View attachment 229209
Click to expand...

Ooooo! Bowling for mulloscs! Who's the bookie? I'll put 50 clams on the bristlenose.

In the fields of observation chance favors only the prepared mind - Louis Pasteur
Reactions: dudley and Sprinkle
S

Fresh water change (the reason why the water's clearer and more bubbly than usual) and yet another aquascape rearrangement.

Put in one of the artificial logs I had lying around so the plecos have somewhere to properly hide and hopefully stop digging holes in the sand everywhere to wedge themselves under the dragon stones. The poor cryptocoryne parva had to be shuffled around yet again and I had to awkwardly angle one of the spider wood pieces in the back. Attached the most developed of the Java fern babies to driftwood behind the fake log. 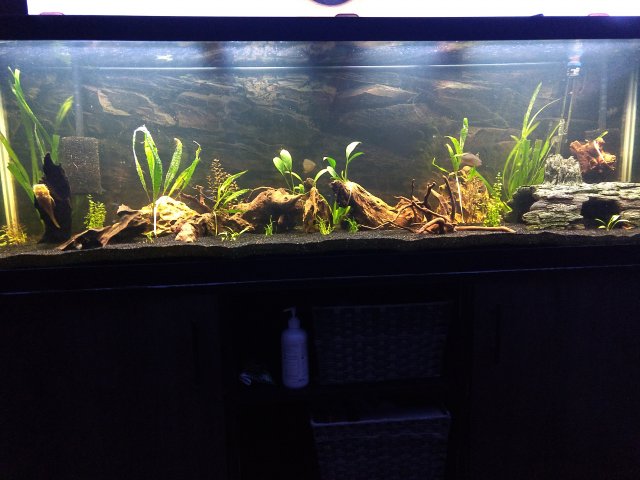 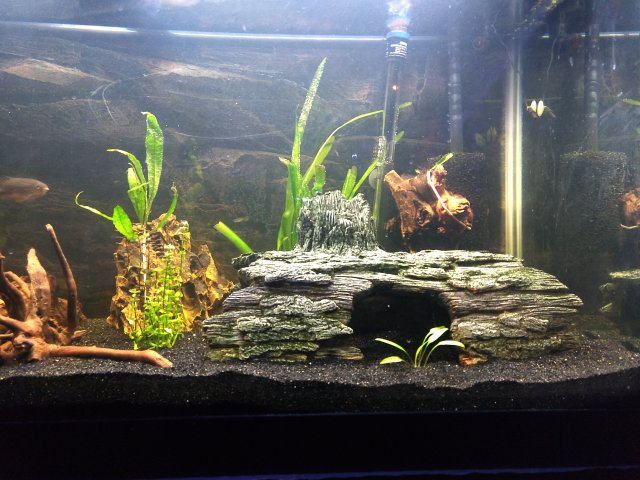 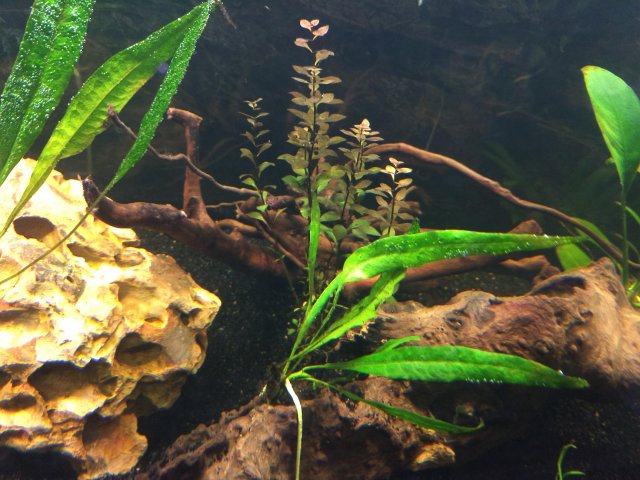 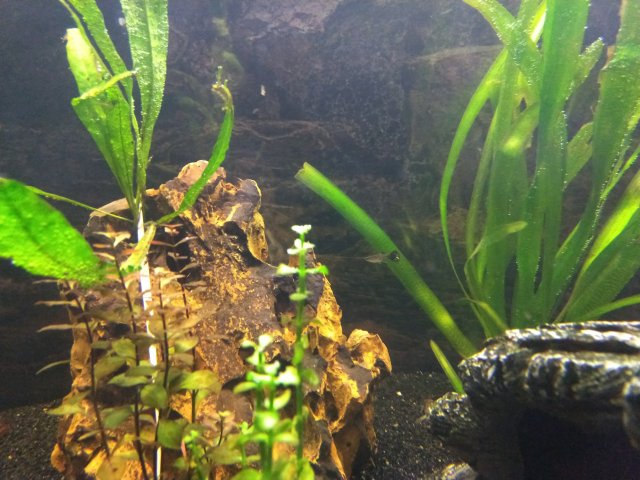 A couple of the Delphax cories. 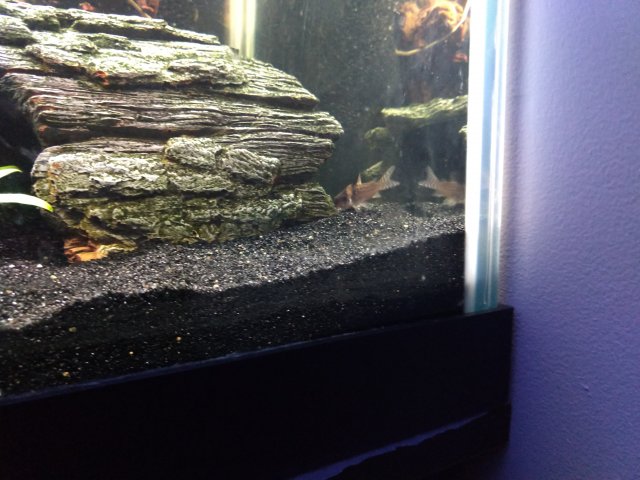 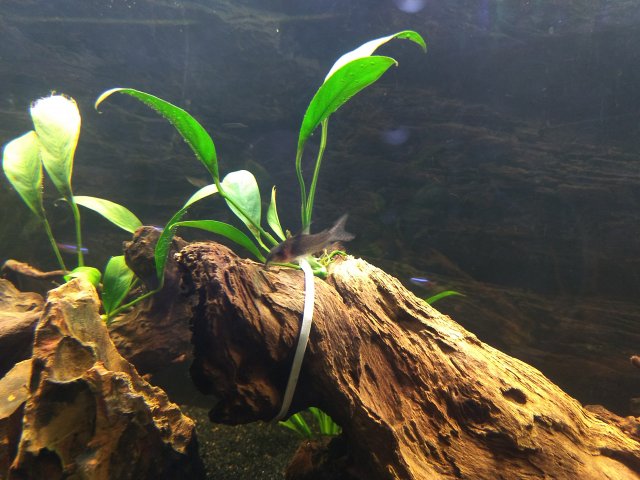 The real treat though. The neons. I've never had them in such numbers so getting to see them shoal en masse like this has made all the work worth it, and it's not even halfway finished. There's still another 7 sitting in quarantine (21 in total once they're all together) and then there's the black neons I will get later for that mixed school I've envisioned all this time. There's 3 apistogramma trifasciata waiting with the 7 neons as well so things are really coming together. 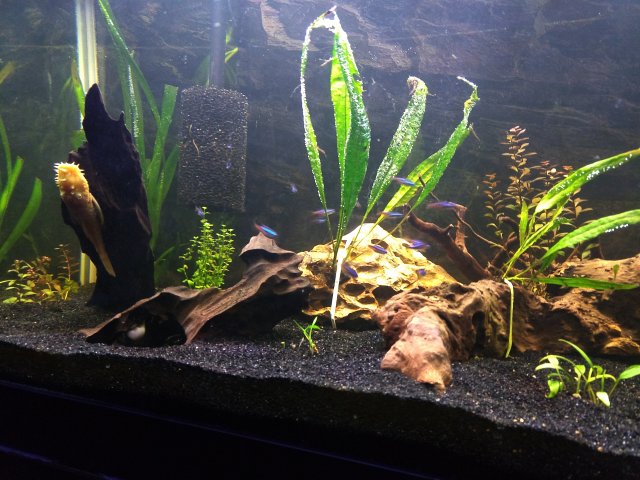 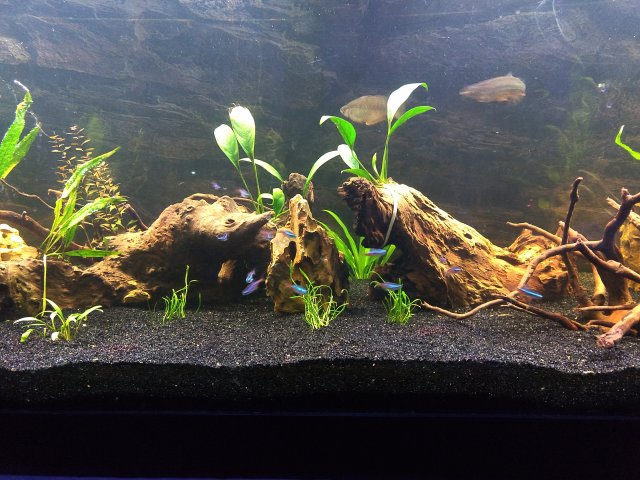 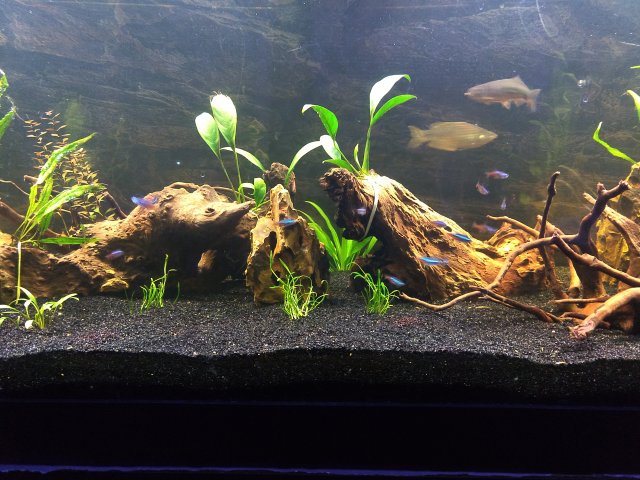 Oh, seriously better for the BN male! I like the layout so far!

Beware of the rubber bands, they degrade after a couple months...& if too tight can strangle rhizomes of anuibias & java ferns. You may be picking out rubber band bits for a while IME...thread or super glue gel is the prefered method...but I've only done thread...old school, lol.
Reactions: Sprinkle
S

fishorama said:
Oh, seriously better for the BN male! I like the layout so far!

Beware of the rubber bands, they degrade after a couple months...& if too tight can strangle rhizomes of anuibias & java ferns. You may be picking out rubber band bits for a while IME...thread or super glue gel is the prefered method...but I've only done thread...old school, lol.
Click to expand...

I'm going to remove the older ones soon and hope the plants have anchored themselves enough. Don't have super glue or string on me (there's aquarium-safe silicon but it takes 24 hours to dry).
F

Oh. Yeah I could find some around here I'd imagine. My mother has a sewing table with spools of the stuff.
Reactions: Sprinkle

I grew up in a household where gender roles were very strictly defined. Cooking, sewing, cleaning, laundry, etc. were "women's work". Schools at the time (even here in Wyoming) discouraged gender imprinting. But at home I was actually not allowed to learn anything considered "women's" work. I thought that I never really subscribed to that because of school, but when I got married in my late 20's I realized it was imprinted worse than I thought. My wife and two daughters have broke me for the most part. I've learned to do many things, but I've just never been able to master others, sewing among them. The world is a crazy place sometimes.

Oh, WYite, you're even worse than my slightly enlightened (older than you) upbringing, lol. I missed the "sewing gene" that runs in my family, buttons are my best, but not great. Java ferns & anubias attachment doesn't count as sewing...more like scout knot tying (either/any gender scouts).